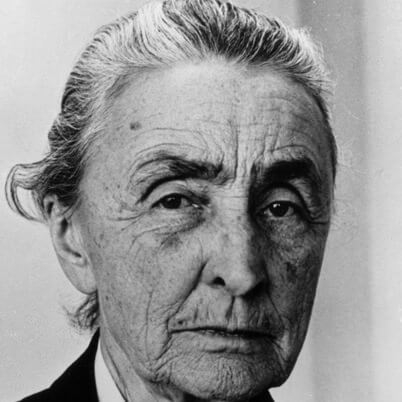 For several decades Georgia O'Keeffe (1887-1986) was a major figure in American art who, remarkably, maintained her independence from shifting artistic trends. She painted prolifically, and almost exclusively, the flowers, animal bones, and landscapes around her studios in Lake George, New York, and New Mexico, and these subjects became her signature images. She remained true to her own unique artistic vision and created a highly individual style of painting, which synthesized the formal language of modern European abstraction and the subjects of traditional American pictorialism.

Her vision, which evolves during the first twenty years of her career, continued to inform her later work and was based on finding the essential, abstract forms in the subjects she painted. With exceptionally keen powers of observation and great finesse with a paintbrush, she recorded subtle nuances of color, shape, and light. Subjects such as landscapes, flowers, and bones were explored in series, or more accurately, in a series of series. Generally, she tested the pictorial possibilities of each subject in a sequence of three or four pictures produced in succession during a single year. But sometimes a series extended over several years, or even decades, and resulted in as many as a dozen variations.

By the mid-1920s, after an initial period of experimentation with various media, techniques, and imagery, O'Keeffe had already developed the personal style of painting that would characterize her mature work. During the 1930s she added an established repertory of color, forms, and themes that reflected the influence of her visits to New Mexico. For the most part, her work of the 1950s, 60s, and 70s relied on those images already present in her art by the mid-1940s.

O'Keeffe's flower paintings have often been called erotic, which is not exactly wrong, but the emphasis is misplaced. It would be surprising if an artist with her passion for the transcendent did not make use erotically charged imagery. Reducing her flowers to symbols of female sexuality is however, a trivializing mistake, for the sexual particulars matter less in art with the aspiration that the vivid and more universal sensation of a joyful release into another world beyond the usual distinctions. O'Keeffe's interest in the scale of transcendence let her to violate certain boundaries. Not only did she make the large small and the small large, but she took serious chances with color, sometimes upsetting conventions of visual harmony in order to startle the eye into new kinds of seeing. She liked to stress visual edges that have metaphysical implications: between night and day, earth and sky, life and death. She was not afraid of the large, symbolic reverberation; her bones often seem strangely alive, the flowers of the desert.

Through her repeated reworkings of familiar themes she produced an enormous body of work that in intensely focused and unusually coherent. Some 1,000 paintings, an equal number of drawings and watercolors on paper, and just a few sculptures, have been documented in a catalogue raisonne of the artist's work published in 1999, and still others are unrecorded because they were destroyed by the artist.

The subjects O'Keeffe painted were taken from life and related either generally or specifically to the places where she had been. Through her art she explored the minute details of a setting's or an object's physical appearance and thereby came to know it even better. Often her pictures convey a highly subjective impression of an image, although it is depicted in a straightforward and realistic manner. Such subjective interpretations were frequently colored by important events in the artist's personal and professional life. Their impact on her work was often unconscious, as the artist acknowledged late in life:

I find that I have painted my life - things happening in my life - without knowing. ”

O'Keeffe's words, like the ones above, were often poetic and allusive, but rarely spoke directly about her paintings in any concrete way. Although she disliked the interpretations that resulted, her reluctance to analyze her own work led others to do it for her. In spite of living to the age of 98, O'Keeffe made few public statement and published only about a dozen short catalog introductions and two articles. The two books she collaborated on later in life (Some Memories of Drawings, 1974, and Georgia O'Keeffe 1976) contained mainly illustrations of her art, but were especially notable for their inclusion of her commentaries on selected works (albeit written from the perspective of an octogenarian).

Throughout her life, O'Keeffe was emphatic in her belief that art could not be explained adequately with words:

Colors & line & shape seem for me a more definite statement than words. ”

I think I'd rather let the painting work for itself than help it with the word. ”

Georgian O'Keeffe continued to paint into the 1970s, her almost complete loss of eyesight and ill health during the last fifteen years of her life significantly curtailed her artistic productivity. Her eye problems began in 1968, and by 1971 macular degeneration caused her to lose all her central vision, leaving her, eventually, with only some peripheral sight.

Yet even during these waning years O'Keeffe remained true to the spirit of her art through the life she led. For her, there had been fulfillment in an existence that almost totally revolved around her art. It was, after all, through painting that O'Keeffe filtered all experience.

On March 6, 1986 O'Keeffe died in St. Vincent's Hospital in Santa Fe, having almost reached her goal of living to 100; she was 98 years old. About this moment she had once surmised:

When I think of death, I only regret that I will not be able to see this beautiful country anymore... unless the Indians are right and my spirit will walk here after I'm gone.”

At her request, there was no funeral or memorial service, though her ashes were scattered from the top of the Pedernal over the landscape she had loved for more than half a century.

Ladder to the Moon